Greetings from the Summoners War Team!

Participants will be selected based on the records in World Arena Season 5. So if you're interested in SWC 2018, make sure to participate in the World Arena. We hope to see the hidden strong users to sign up to challenge this year's championship!

Our team is very excited to share this developer's note that a lot of you have been waiting for. As we mentioned previously, we'll be talking about the major update.

We've divided the developer's note in 3 different parts and today we'll be sharing the first part of it.

The first content is called "Ancient Labyrinth". This new guild content has been designed based on a concept of a labyrinth, and is being developed to be released in July.

Please read below for more details!​

The battles between guilds became more and more intense to conquer the highest spot of the Isle of Conquest, and the Summoners were eager to gain more power. Some of brave Summoners gathered and headed to gain a power that's hidden under the very bottom of the basement, and that's when they spotted the Ancient Labyrinth, a place that has been asleep for thousands of years. The Ancient Labyrinth is a dangerous place with full of powerful monsters and battles that consist of unique and special attack patterns that never been witnessed.

Do you remember the image that we shared in the previous developer's note?

That was an image of the Ancient Labyrinth’s final boss.

The Ancient Labyrinth consists of a number of stages, and each stage has various clear conditions and characteristics. This is guild cooperative PvE content where guild members need to work together to go through various stages to fight against the boss that's guarding the labyrinth.​

Here's an image of the Ancient Labyrinth.

[ You have to explore the locked areas and find bosses. ]

This is a bird's-eye view of the Ancient Labyrinth. Unlike a narrow entrance of the ground level, the labyrinth consists of numerous tile-shaped maps ranging deep underground.

Let's take a look at the screen that's currently under development.

This is the first screen that you'll see when you enter the labyrinth. The labyrinth is so wide that the map can be scrolled horizontally and vertically, and can be also zoom in or out.

① It's the first starting point of the labyrinth. You can enter battles of the areas that are connected to the cleared areas.

② It's a cleared area.

③ It's an area where you can enter to battle. Based on the starting point, you can attack areas that are adjacent to the cleared areas.

This time, we'll talk about some of the UIs in the screen. 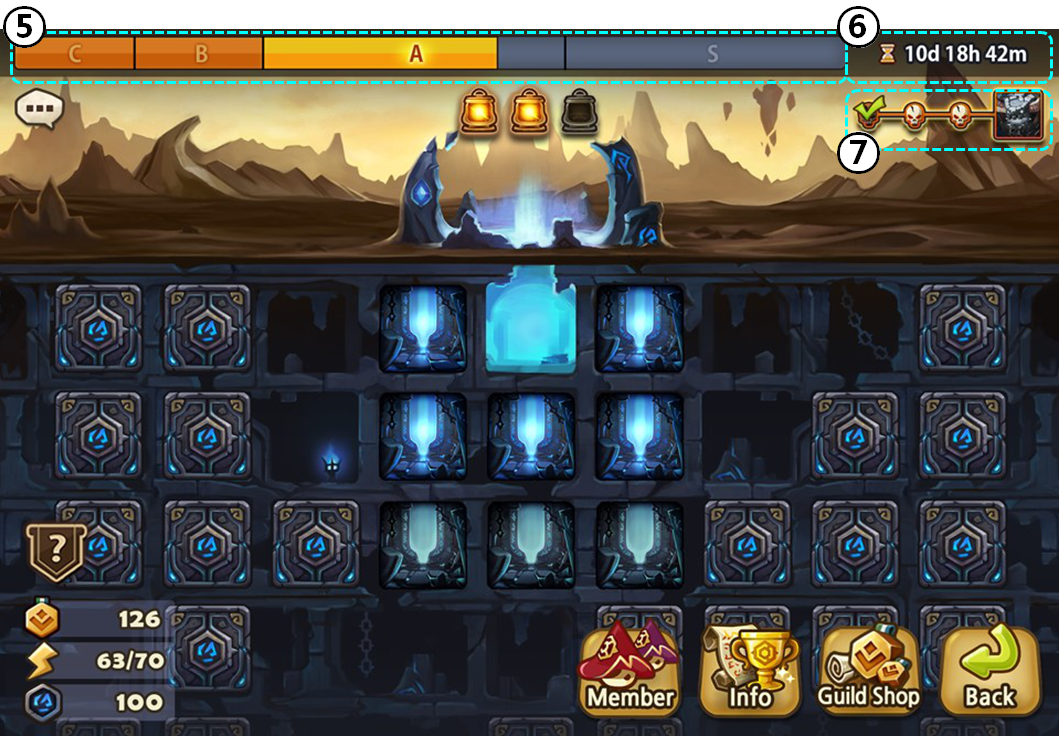 ⑥ Remaining time until the reset of the current labyrinth will be displayed.

There are four bosses in total, including three mid bosses and one final boss, who are guarding the labyrinth.

A labyrinth will be cleared when you defeat the final boss, and a new labyrinth will open at midnight of the next day based on the date you cleared the previous labyrinth. Labyrinth changes its structure and location, and you can enter new labyrinths. Of course, locations of the bosses will be changed as well.

Also, if you defeat the final boss and clear the labyrinth, the rewards will be given to the Guild Members. Thus, defeating the final boss as fast as possible is the ultimate goal of the guild labyrinth.

It will be important for your Guild to work together and strategize how to find a boss. We believe you will be able to experience another fun and excitement that are different from the Guild Battles and Siege Battles.

Next, we'll explain about the unique battle system of the labyrinth.

Here's an image of a screen that will be appeared when you tap the area that can be entered.

① Each area has clear points.

② You can set the battle difficulty level.

When entering a battle, you can choose the level of difficulty, and the harder level you choose, the more points you earn.

You will be able to move on to the next areas fast if you play in higher difficulties!

Some stages have no specific conditions while other stages have special conditions. We won't go into details, but a stage with turn limits or a stage where you have to rescue the allies and many more interesting stages will be available.

- All of Guild Members can participate with no limit to the number of participants.

- A Guild Member can enter the battle up to 3 times a day.

- The no. of battle entrances won't be deducted if you're defeated in the battle.

- The monsters that you used on winning battles can't be used again.

- A reward will be given per battle. (Up to 3 rewards are available, and you have to win a battle to acquire one.)

This is what we have for the first part of the developer's note regarding the Ancient Labyrinth!

We hope this information was interesting for you and we can't wait for this update to be released as much as you do!

You might struggle from time to time in the labyrinth, but your Guild will be able to feel a sense of huge accomplishment when the final goal is reached altogether.

※ Please be aware that the developer's note has been written during the development stage and some content might change. We ask for your kind understanding.

We talked about some of concepts of the Ancient Labyrinth briefly. In the following developer's note, we'll be talking about the rewards and battle skills of the bosses.

We thank all Summoners who support us, and we're working hard to prepare a concrete update every day.

We will be back with another developer's note soon, so please stay tuned.