In today’s note, we are excited to talk about the Repeat Battle system that our team is currently developing. Our goal is to release this system via our next version, v6.0.4.

Please continue to read below for more info! 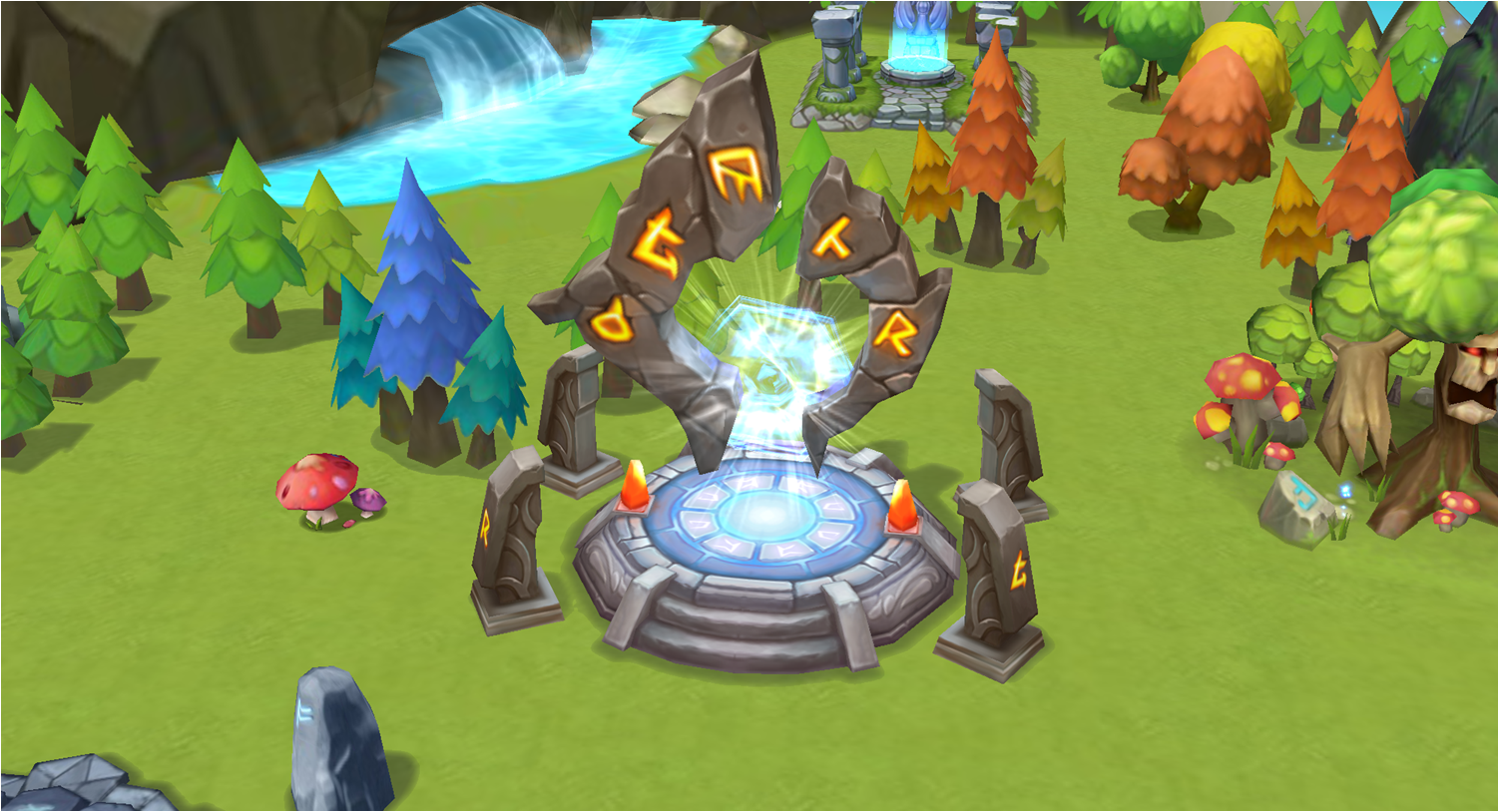 This is the Gateway, which you will visit a lot from now on.

The Gateway has the ability to help Summoners to go to the battle location they want, match the Rift Raid party, and recharge Energy. The Repeat Battle System will be available to use through the [Gateway].

We will first briefly introduce what the Repeat Battle System is, and follow up with more detailed explanation.

: The battle can be proceeded when you select the battle location through the Gateway, not the Battle Map screen.

- You can stay in the Sky Island and use other features while the Repeat Battle is on.

: You can summon/power-up monsters, equip/power-up Runes & Artifacts. You can use all other contents except battle content.

- You can check the ongoing battle records in real-time.

: You can check the battle progress and acquired rewards.

We’ve prepared few screenshots of what we are currently developing to help you understand the system.

Please check out the screenshots below along with the explanation. 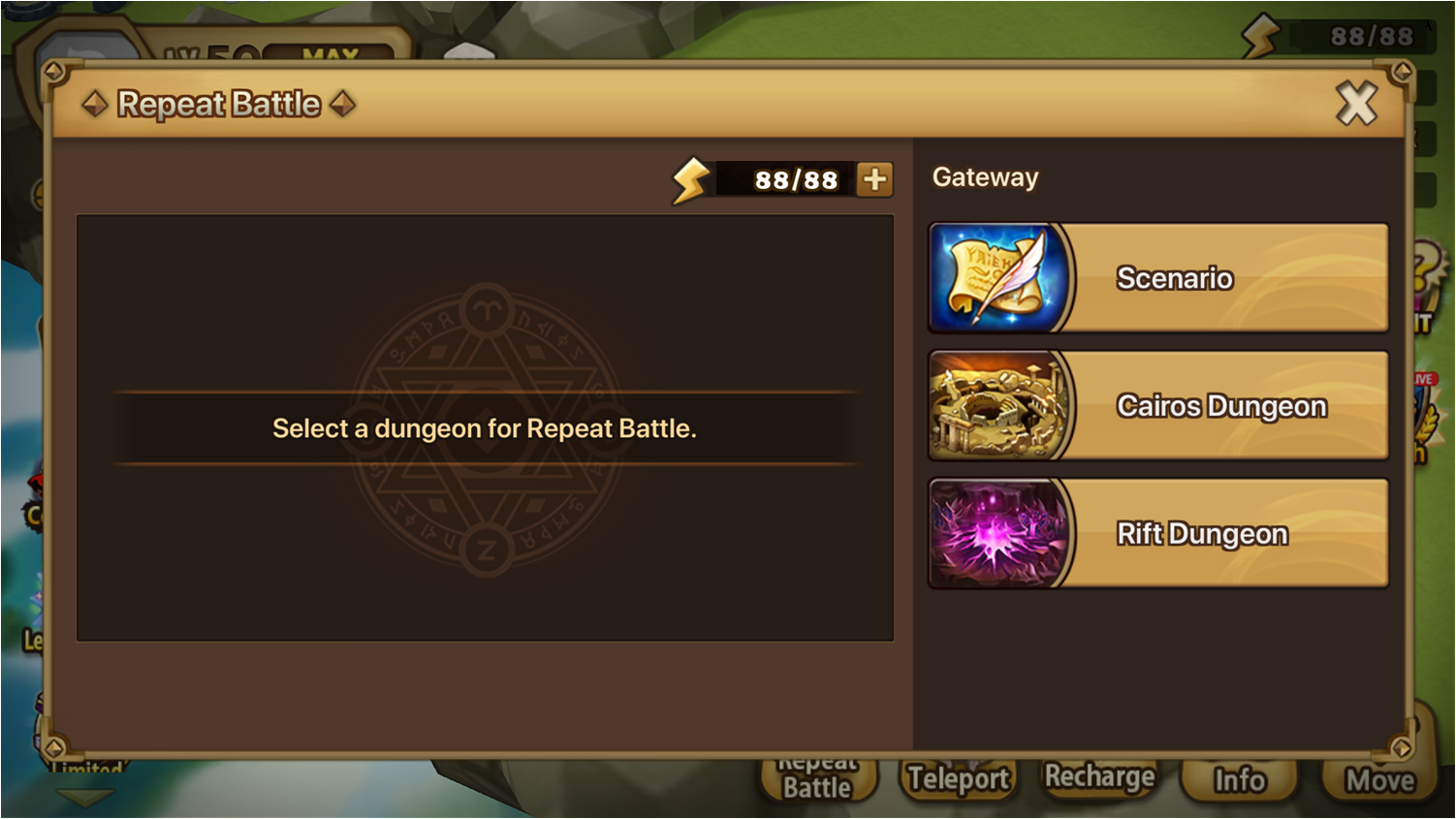 This is the first screen you’ll see when you enter the [Repeat Battle] Menu from the Gateway Building.

Before you start the Repeat Battle, you will go through a two-step preparation.

First, select a dungeon you want to use the Repeat Battle.

Cairos Dungeon, Rift Dungeon and Scenario will be added to the list of the Repeat Battle with the first update. We plan to expand the list to other contents such as Dimension Hole.

- The battle locations in which the Repeat Battle can be proceeded are as follows.

* If the target battle areas are locked, you can use the Repeat Battle once they are unlocked.

Second, select the monster deck you will use.

Please note that you can only use your monsters, and not the rep monster of your friends.

Now the monster deck is ready, let’s head to the battle!

Please take a look at another image below.

When the Repeat Battle begins, you will see the screen above.

(1) You can check which battle area you’re in and the no. of battle times.

(2) You can see the ongoing battle screen.

It’s a PIP screen where you can spectate the ongoing battle in real-time.

You can not only spectate the battle screen, but also can modify your boss attack order or tap specific opponent monsters to make your monsters attack the targeted monster first.

This PIP screen can be seen as a full screen as well.

(3) You can check the acquired rewards.

You can check the list of rewards you acquired from battle. Runes can be sold from the screen immediately.

The rewards of each battle will be acquired immediately, so you can go to the [Monster > Rune] Inventory to power-up the Runes or sell them while running the Repeat Battle.

Moreover, you can check the detailed battle progress of each battle by tapping the [Record] Button.

Lastly, here’s the result screen you will see when the Repeat Battle ends. 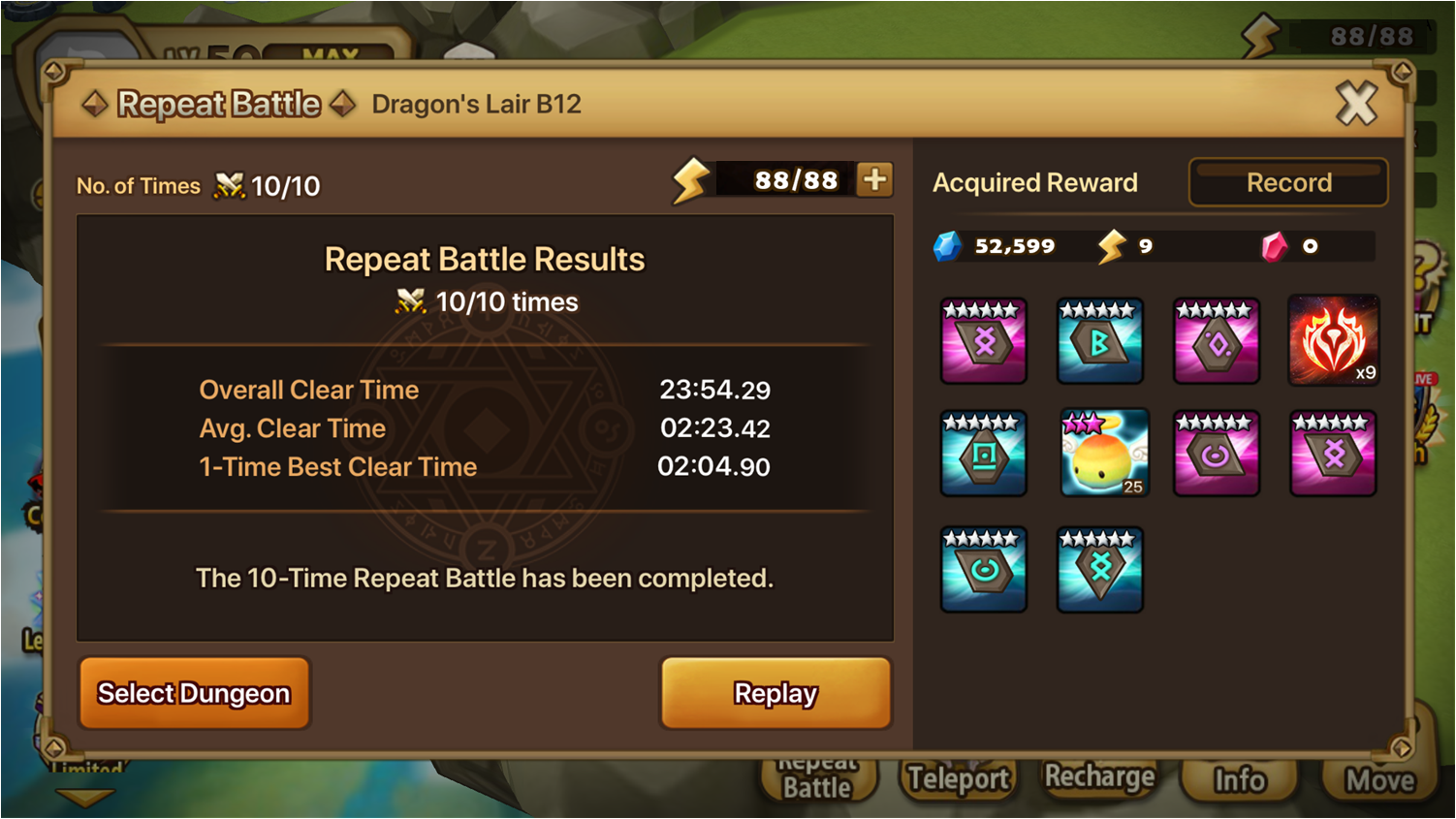 When the battle ends, you can check the additional information of each battle as follows:

- Survival status of each Monster participating in the Repeat Battle

If you want to restart the Repeat Battle in the same battle area, you can do so by tapping the [Replay] Button in the battle end screen. To change the battle area, simply tap the [Select Dungeon] Button to do so.

While designing the Repeat Battle, we had an additional concern.

We wanted to make the Repeat Battle that not only increases the convenience in the game, but also make the system to be more valuable.

After discussion, we thought it will be cool if Summoners can play other contents while running the Repeat Battle.

Summoners farming runes and leveling up monsters from the Repeat Battle while summoning monsters and powering up the acquired runes at the same time and having time to consider which rune sets to equip on monsters for each content… This will help Summoners to enjoy Summoners War even more with ease!

So, we will now talk more about how to enjoy the Repeat Battle and other contents at the same time. 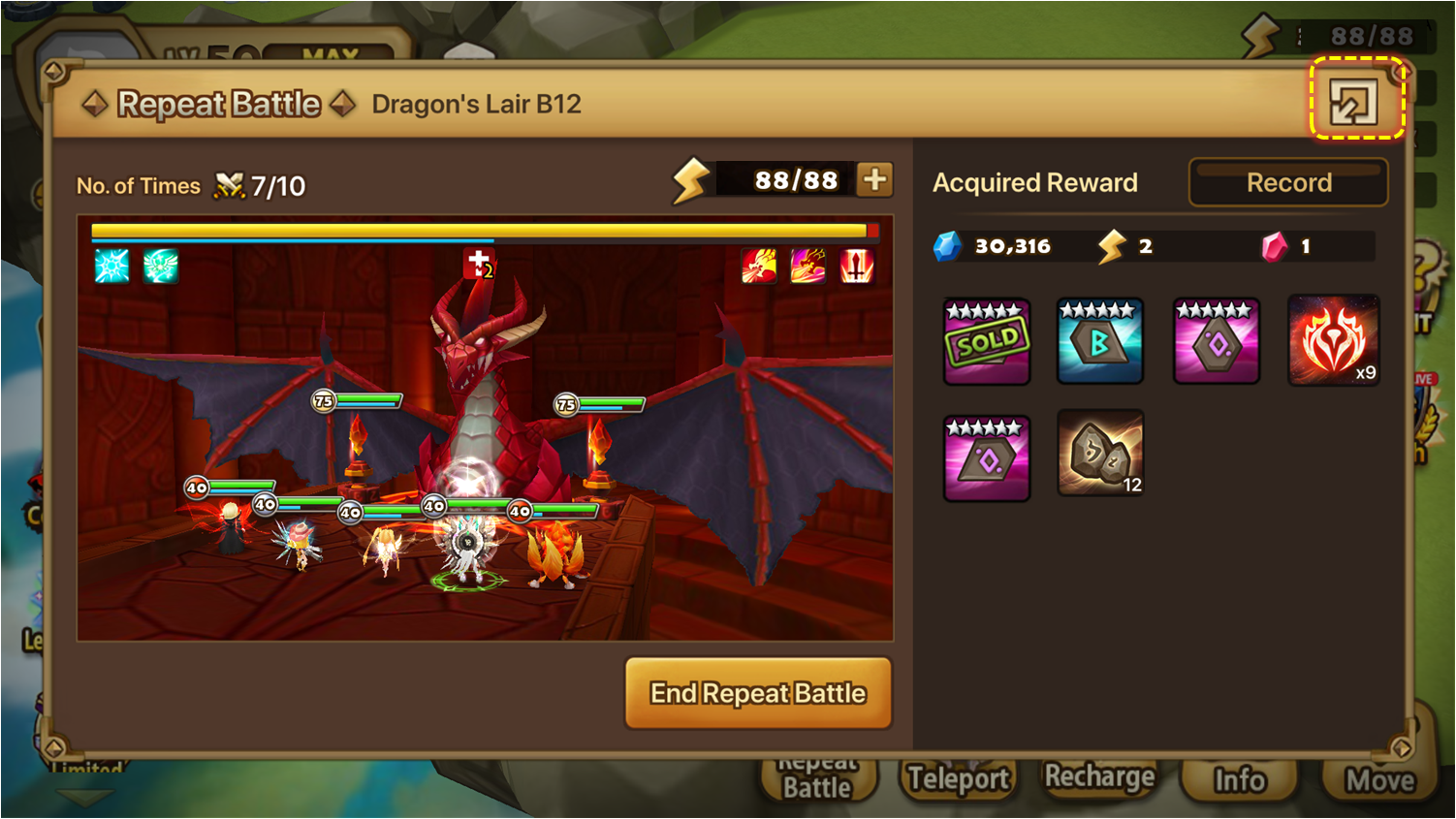 This is the image we showed you earlier in the note.

At the top right, you can see a button designed a little differently from the existing buttons. This is the Repeat Battle Minimization Button. 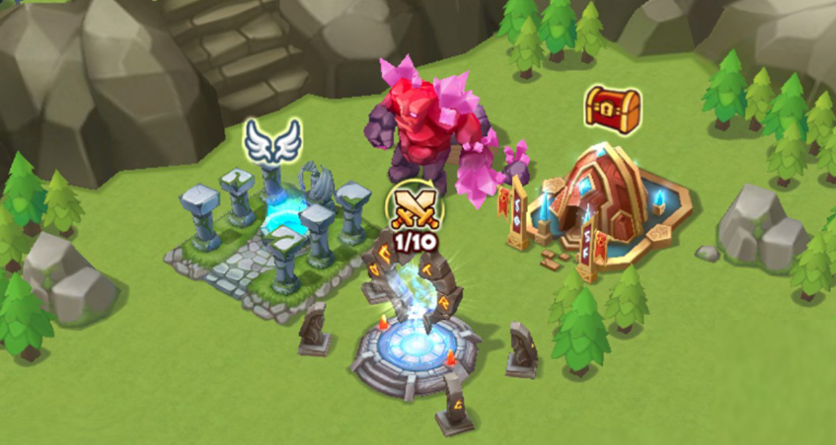 Like this, you can hide the menu and enjoy other contents at the same time.

The game elements that can be played with the Repeat Battle include the following: 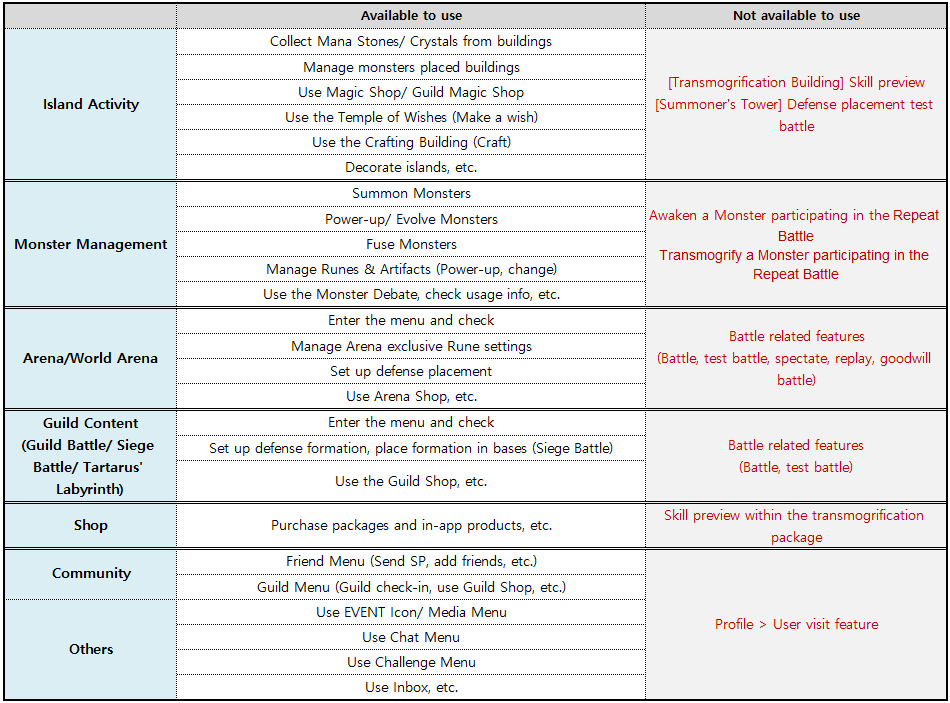 As you can see, you will be able to use various features except battle.

Currently, our team is developing the Repeat Battle System to be suitable and useful for our users.

As mentioned earlier, we want this system to not only provide convenience to users but also assist users to play the game with more tactic and strategy. Please stay tuned how this Repeat Battle System will develop over time.

Lastly, we would like to talk about the rules of Repeat Battle before ending today’s note.

- A total of 10 battles are proceed for one Repeat Battle.

: There is no limit to the number of times you can use the Repeat Battle.

- You can use the Repeat Battle in the cleared areas only.

: For Rift Dungeon, the Repeat Battle can be used on the dungeons that have been cleared with D Rank or higher.

- You can use the Repeat Battle of one party only.

- You cannot use the rep monster of friends, and only the monsters you possess can be used.

- You cannot change the monster deck while running the Repeat Battle.

- The battle will be played in auto mode only, and manual mode cannot be used.

- The monsters participating in the battle cannot be Awakened or equipped with transmogrifications during the Repeat Battle.​

- The Repeat Battle will end when you face the following conditions:

: When you don’t have enough Energy

: When you don’t have enough inventory storage for Rune/Artifact/Grindstone/Gem

: When you get defeated in a battle

This is all we have for today!

We hope you are excited for what we talked about in this note.

The Developer's Note is intended to help you understand the upcoming updates in advance.

As development and testing are still underway, we ask you to understand that the actual update may be different from what we have shared in this Developer's Note.

Before ending the note, we have some exciting news about SWC2020!

SWC2020, which is being held for the fourth time this year, is in the midst of the regional preliminaries. So many thrilling and unexpected matches have been played by our contenders. There are various streaming rewards available for Summoners who live stream the preliminaries, so please make sure to tune in and give a big support to the players!

Also, don’t forget to participate in our SWC2020 Preliminary Prediction Event and get great rewards.

The contents discussed in today’s note will be available via v6.0.4 update, so please stay tuned.

We will be back another exciting Developer’s Note.